This June after joining hands with Suzuki, Toyota has officially launched their new car in India. Toyota Glanza a premium hatchback that has the same look as Baleno but with Toyota accessories.

In fact, the design and features of Glanza are completely the same as that of Baleno. But here Toyota is offering a 3-year warranty which can be extended up to 5 years. Rest it’s very difficult to distinguish between the two cars.
From the rear side, it is almost the same as that of Baleno. Basically, It comes under two variants that are G and V, where G stands for Zeta and A stands for Alpha top-end for both automatic and manual transmission. But, it comes only in petrol version. 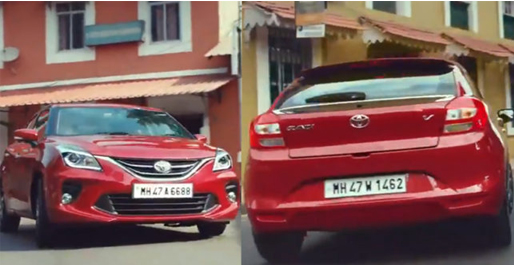 The ex-showroom price is 7.21 lakh in India. Where Alpha variant is 8.9 lakh.

However, if someone pays a lot of attention then only will find a subtle difference. It is available in 5 colors. Its alloy looks similar to that of Baleno. In interior Toyota has really worked on seats and steering wheel which is quite attractive but no ac duct on the rear side.

Other than the Toyota logo the only thing new is the two slat 3D surround chrome grille which gives it a very attractive look.

The cabin space is also the same as that of Baleno. All-black interior theme with a blue pattern on seats and door is also the same as Baleno. Talking about its audio system which is equipped with Maruti’s latest Smartplay studio infotainment system which Toyota is calling ‘Smart Playcast Audio System’.
The Toyota-Suzuki partnership has promised to release some products and things. By now we are well aware that Glanza is basically a cross-badged version of the Maruti Suzuki Baleno with a very small difference between them. But buyers are expecting more from this partnership.