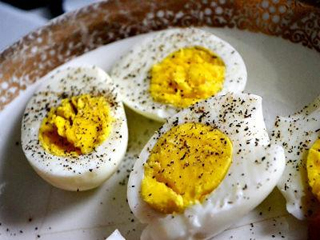 The study carried out at the University of Pennsylvania School of Nursing found eating eggs for breakfast, instead of cereal or porridge, will keep them fuller throughout the morning.

Published in the Eating Behaviours journal, the study looked at 40 eight-10 year olds who ate a 350-calorie breakfast of eggs, porridge or cereal and then played physical games before eating lunch.

The children were asked throughout the morning how hungry they were and parents kept a food journal of what else the children ate.

The research, led by Tanja Kral of the university’s Department of Biobehavioural Health Science, found children who ate eggs for breakfast reduced their energy intake at lunch time by 70 calories, which converts to about four percent of a child’s daily intake.

According to scientists, children who eat beyond their calorie threshold can gain weight and cause obesity, if they do so regularly.

“I’m not surprised that the egg breakfast was the most satiating breakfast,” said Kral.

“What does surprise me is the fact that, according to the children’s reports, eating the egg breakfast didn’t make them feel fuller than cereal or oatmeal [porridge], even though they ate less for lunch.

“We expected that the reduced lunch intake would be accompanied by lower levels of hunger and greater fullness after eating the high-protein breakfast, but this wasn’t the case.

“It’s really important that we identify certain types of food that can help children feel full and also moderate caloric intake, especially in children who are prone to excess weight gain.”