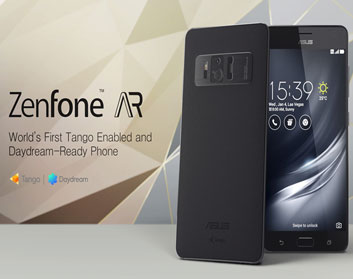 It is a Smartphone that has been developed for both Google Tango’s AR and Google daydream’s VR.
It is the first device that has the ability to do that. The technology sector always has much slang but nowadays artificial learning and machine learning are getting ground but now two special terms have come i.e. AR and VR which means Augmented Reality and Virtual Reality. We are listening to this terms from past many years but now the device has come which offers both the terms in our hand that means the display it is having gives great VR features on both front and back camera.

When Samsung came with its gear VR, it was the first smart phone with virtual reality some years back. But now the time has changed, Zenfone AR comes with a headset and controller with a variety of so many VR Apps is inbuilt.

It has many options for connectivity like Wi-Fi, GPS, Bluetooth, NFC, 3G and 4G.It has almost 5.70-inch touch screen display and weigh 170 grams. It also contains some sensor like barometer, Gyroscope, Accelerometer etc. which makes it unique from other android phones.

It has Special AMOLED display so that the people can have an experience of good VR. As the playing content on the phone can have a bit problem with the clarity and it has hardware that understands both space and motion and then uses it with Google Tango.

Also, the graphic capabilities of the phone are quite nice with the Adreno 530 GPU and if you are using AR or VR, the battery is drained faster as compared to its normal use but that is a common feature in every phone.

The rear camera of this phone is having different types of preset modes and also the field depth is really charming. This phone also have feature of working well in low light and is one of the best camera on all the present android phones.

After seeing and going through its all features, it results that this is one of the cheap phones through any standards and contains all the premium features at an affordable price i.e. Rs 49,999 and will be ready to come in a market from August 19.