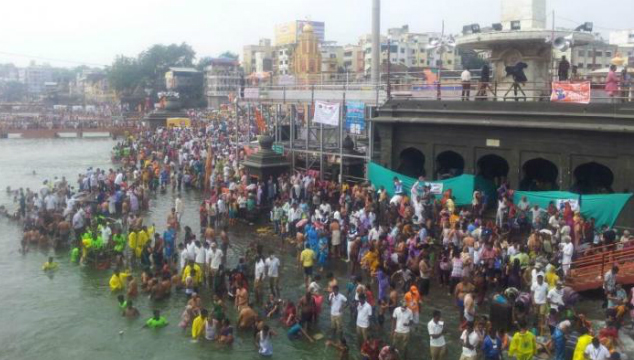 The Trimbakeshwar Temple authorities have gone back on their April 3 resolution wherein they decided to ban entry of men too into the core worship area at the famous Lord Shiva shrine here.

The Trust revoked its decision of April 3 owing to pressure from locals, Nagare, who presided over the meeting of the trustees said.

The meeting did not decide anything on the centuries-old ban on women’s entry into the core area, he said.

However, the temple trustees were unanimous about seeking further guidance from the Bombay High Court in the matter even after its recent ruling that it is the fundamental right of women to go into places of worship.

The court had also directed the Maharashtra government to take pro-active steps for ensuring compliance with the law for the prevention of discrimination against women vis-a-vis entry to places of worship.

Continuing with the old practice, men devotees were today allowed between 6-7 AM into the core area where the main ‘linga’ is placed. They can enter this innermost part only after donning a specific gear called the sovala (silk clothing).

Women, can, however have ‘darshan’ from outside the core area.

The ancient temple, located 30 kms from Nashik, is a major Lord Shiva shrine of the country, which has one of the 12 ‘jyotirlingas’, drawing devotees from far and wide.

According to Ghule, a member of the Trimbakeshwar Temple Trust, the ban on entry of women into the ‘garbhagriha’ is an age-old tradition and not something enforced in recent times.

The ban goes back to the Peshwa period.

Some priests in the temple town said most of the women devotees might not want to defy the tradition.

They claimed that there are certain rays that concentrate in the core area which could probably be harmful to the health of women.

On April 3, the temple authorities had imposed a restriction on men’s entry too into the sanctum sanctorum of the shrine with an aim to provide “equal treatment” to both the genders.