Shiv Mandir Kathgarh is one of the very famous temple in Himachal Pardesh. This temple is devoted to Lord Shiva and Parvati. Temple is situated 7 Kilometers from Indora on the meeting point of the Beas and the Choch rivers, built in Roman architectural style housing two Lingas of light grey Sandy stone of 6’ and 4’-7” in height having octagonal base with every side measuring 1’-3” and 1’-3” above the ground level personifying Lord Shiva and Parvati respectively. These Lingas which are in direction of North-West stand 3 1/2″ apart at the bottom and inclining towards each other with just 2″ away from each other at the top. 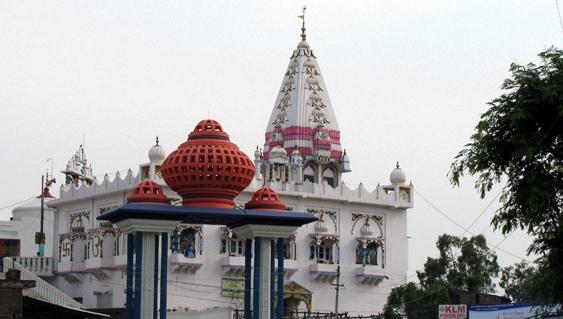 According to a story in “Shiv Purana” there was a war between Lord Vishnu and Lord Brahama as to who is supreme of the two. They were about to use “Pashupat” which would have brought destruction and annihilation all around. Lord Shiva could not help seeing all this and he appeared as a fire pillar between the two and both the warring Lords became peaceful and wanted know as to what this fire pillar is? Lord Vishnu disguised as ‘Shukara’ went to ascertain the bottom and Lord Brahmaas swan flew into the sky to have a look at the top of this fire pillar. Lord Vishnu came back without reaching the farthest point of the pillar in the ground. Lord Brahma came back with a ‘Ketki’ flower saying that it was lying on the top of the pillar. Both the Lords reconciled. Lord Shiva then appeared and was very happy with the devotion and truthfulness of Lord Vishanu and awarded him equality with self. This great fire pillar came to know as linga of Lord Shiva in Kathgarh Temple.

Reference to the temple is also found in “History and culture of Himalayan States” by Prof. Sukhdev Singh Charak. It is said that the army of world conqueror Great Alexander of Macedonian got demoralised on reaching Kathgarh and he returned back home from this place. Parveen Gupta in his book “Apna Shahar Pathankot” says the conquering campaign of Great invader Alexander stopped near Pathankot (River Beas) and he has to change his plans.

According to another story in Indian epic ‘Ramayana’, king ‘Bharat’, the brother of lord Rama, use to pay obeisance to Lord ‘Shiva’ at this pillar on his way to his grandparents in ‘Kashmir’.