JioPhone Unlimited Calls and 4G Data at Rs 153 a Month

News of the launch pushed share prices of RIL’s rivals down on the stock exchange. Bharti Airtel shares fell by 2.05 per cent Rs 153 a month and Idea Cellular by 3.11 per cent while RIL shares soared 3.76 per cent during the day. 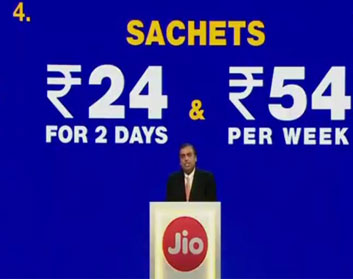 Customers will be able to get the device for a one-time refundable security deposit of Rs 1,500, said Mukesh Ambani, chairman of RIL, while announcing the new offer at the company’s 40th annual shareholder meeting. But analysts said the bigger draw could be the monthly tariff of Rs 153, or about Rs 5 a day, to access free voice calls and unlimited data.

News of the launch pushed share prices of RIL’s rivals down on the stock exchange. Bharti Airtel shares fell by 2.05 per cent Rs 153 a month and Idea Cellular by 3.11 per cent while RIL shares soared 3.76 per cent during the day. Analysts expect the offer to be disruptive, given that Jio is aiming to make almost 5 million units available every week citing demand. There could be potential pitfalls as well, including questions over Reliance Jio’s ability to maintain product quality of the device being offered and service coverage in tier-3-4 towns where most of the demand is likely.

Cellular Operators Association of India’s director general Rajan S Mathews said Jio’s offer of an “effective zero price” is a “clever marketing position” as the move will help the company save licence fee and other government levies.

“Reliance Jio offer is clever marketing position… they are saying the handset price is effectively zero. So no licence fee, spectrum usage charge has to be paid on that. The Government will have to look at what sale of price for zero means,” Mathews said.

Samco Securities CEO Jimeet Modi said that considering the size and scale of Reliance, it will capture a lion’s share of the market and will disrupt many other ancillary businesses. “The bigger threat will be the dominance that the company will enjoy over many business processes, which will be offered digitally… (It) will be a cause of concern from the country’s point of view,” Modi said.

But Ambani chose to dub JioPhone as “India ka Smartphone” because it comes with features such as 4G data, a TV cable link and apps that are usually unheard of in feature phones. He said that the phone has been created by Indian engineers and would be fully made in India by the end of the year.

Buyers will need to pay the refundable deposit to “prevent misuse” and at the end of three years, they will be able to return the phone and reclaim the amount, said Ambani. With JioPhone, Jio will also try and bring down data affordability to a large extent. Apart from the monthly tariff of Rs 153, there will be easier-to-buy sachets priced at Rs 24 and Rs 54. Users who want to consume more data will need to opt for the Rs 309 Dhan Dhana Dhan plan.

At the moment, there are 2G feature phones with colour screens from obscure brands at around Rs 800, but they do not work on 4G and cannot offer a decent data experience. For the competition — service provider or manufacturer — to make a 4G feature phone relevant now, they will have to subsidise costs. If Jio is able to offer a better device experience and stable data to sustain it, then there could be a shake-up in the feature phone market in a few months.

JioPhone is reportedly manufactured by Intex, but Jio will be the vendor.