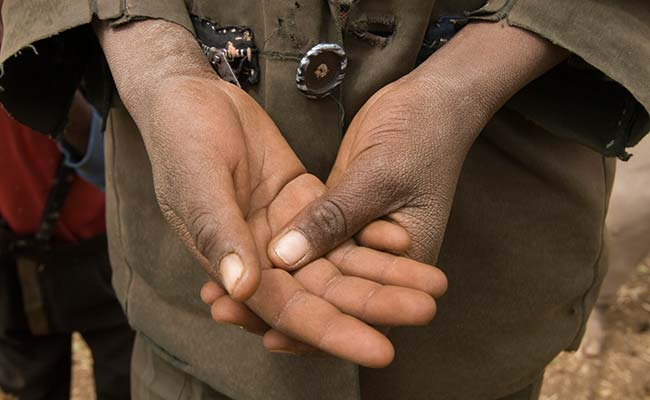 When he travelled half-way across the country to help his mother pay off a debt, 15-year-old Marimuthu had no idea that the he would end up having to escape an abusive employer and seek hospital treatment for serious burns on his legs.

After working 15-hour days in a sweet shop in Pundarpur in Maharashtra with little time off, Marimuthu had a bad headache one day and asked for a break. The shop owner refused, shouted at him and threw a pan of hot oil over his legs, he said. Days later, he ran away.

His mother needed to repay Rs. 20,000-debt and agreed to send her son to work at a sweet shop for one year. She was promised a total of Rs. 40,000 rupees, half of which was given to her as an advance to pay off her debt. The rest was to be paid in November this year.

“I started at six in the morning and worked till nine at night. I worked in a cramped space making sweets through the day and was allowed short breaks for my meals,” said Marimuthu who is from Madurai in Tamil Nadu.

“I had a terrible headache that day and needed to sit down. The shop owner would not allow it. He verbally abused me before picking up the hot pan of oil and throwing it on me,” he told the Thomson Reuters Foundation in a telephone interview.

“After I was burned, I was escorted by a co-worker to my room and some of the gram flour paste we use for cooking was applied to cool the wound. The pain didn’t subside,” he said.

With Rs. 200 rupees he had put aside he ran away, travelling ticketless on trains for two days to get home.

He went to a hospital in Madurai on Monday for treatment of severe burns on both legs.

“His case was brought to our notice through social workers at the hospital,” said A Kathir of the non-governmental organisation Evidence, who registered a complaint with the Madurai police.

“We are not confident of the boy getting justice because the crime happened in another state and there are jurisdiction issues,” he said.