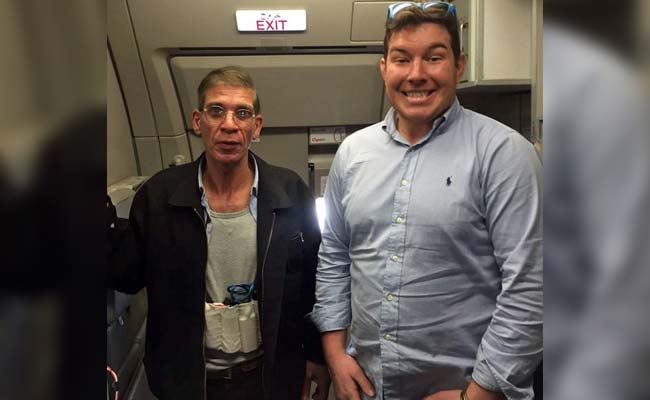 A man who posted a smiling photo with the EgyptAir hijacker and which went viral on the social media has been identified as a 26-year-old Briton, the media reported on today.

Benjamin Innes, who is from Leeds but lives in Aberdeen, was held hostage along with 56 passengers on EgyptAir MS181 flight by Seif El Din Mustafa.

Mustafa had personal motives to hijack the plane and his action was later linked to his ex-wife, who is a Greek-Cypriot and lives in Larnaca.

Innes, seen in the photo with Mustafa, posed it to his friends on Twitter with a message: “You know your boy doesn’t f*** about. Turn on the news lad!!!”

A friend replied: “Is that a bomb attached to the guys chest? You ok? Let us know when you get off.”

According to Daily Mail, Innes is believed to have approached Mustafa while being held hostage on the tarmac and sent the photo to one of his flatmates as well as other friends.

“I have no idea why he took the selfie but I imagine he probably volunteered to take it as he’s no afraid to shy away from anything,” Innes’ friend Chris Tundogan told MailOnline.

The social media went wild over the photo with the hijacker and several Twitter users lauded the British man for the daring “selfie”.

Later, the Cyprus foreign ministry announced the arrest of the hijacker, who had taken charge of the Airbus 320 when it was on its way from Alexandria to Cairo saying he was armed with explosives. The plane was flown to Larnaca in southern Cyprus.

Cyprus officials who had held intense negotiations with the man said he would be interrogated at length. One Egyptian officer dubbed him “mentally unstable”.

Soon after it landed in Cyprus, the hijacker freed most of the passengers, holding back only four crew members and three passengers whose nationality was not disclosed by officials.

As the negotiations continued with the man, the seven escaped — six of them simply walking out of the step ladder and the seventh hurling himself out of the cockpit window.

Earlier, the hijacker was mistakenly identified as Ibrahim Samaha, also an Egyptian. Samaha, however, turned out to be an innocent passenger.