Nurpur fort of Himachal Pradesh is one more marvelous antiquity, which is actually called as Dhameri. It is at a short distance from Pathankot, almost twenty four kilometer and from Dharamsala it is about sixty six kilometers. Nurpur fort got its new name from Emperor Jehangir, he was a powerful emperor Moghul Jala-Ud-Din Mohammad Akbar’s son. For many years, King Akbar desired for a son from his wife Jodha Bai. By following his spiritual guider, he went to Sheick Salim Chisti’s Ziarat which is close to Fatehpur Sikri and the empress and emperor both requested for a son. After some time, their prayer was granted and they got a prince. They named their son after Nur-ud-Salim sage and finally they select the Jehangir title. The unbelievingly beautiful wife of Sher Afghan was admired by the Jehangir, he was in the love with Mehrun Nissa. The unfortunate husband of Mehrun Nissa went for war and he died. Jehangir had expended many years to achieve his love who was a charming widow; she was not at all interested in him. She finally decided to change her mind; the happiest ruler renamed the fort as Nur Mahal means Palace’s light and afterwards it was again renamed as Nur Jehan means World’s light. 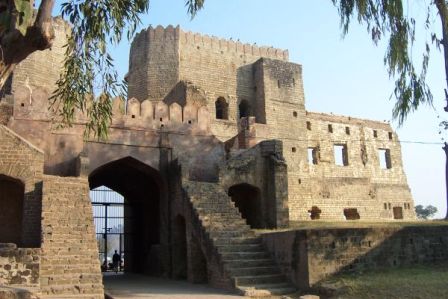 Not only this pretty village got the name of this beautiful lady but the entire conquest area, which projects the grace and elegance of the queen. There is one more ancient fort which was constructed by Raja Basu.At present after completing hundreds of years, Nurpur fort is almost destroyed but still there are some noticeable carved sculptures. In the whole historical ambience, you will also feel little religious due to the presence of a wrecked Krishna temple, it is located inside the fort.

Don’t miss the chance to take a look at the handicraft textiles, made by the regional People. to secure yourself, buy the famous and quality Pachmina Shawls from Nurpur village. This is a renowned place in the entire country for warm and attractive shawls. But even this land has such a priceless talent which is still unknown in the outside area. Through Kotla, you can certainly reach Dharmasala from Nurpur to finish your trip.