In parched Latur, 10,000 litres water a helipad for Maharashtra minister 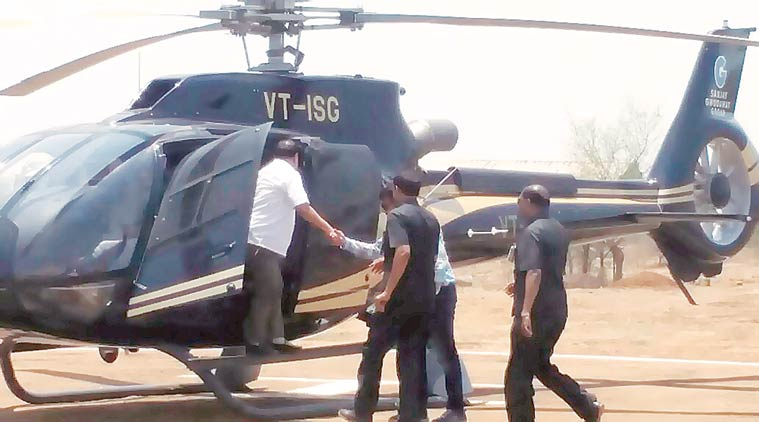 MAHARASHTRA Agriculture Minister Eknath Khadse, who is considered number two in the Devendra Fadnavis government, on Friday landed in a controversy after it emerged that 10,000 litres of water was allegedly used for a make-shift helipad in a village in Latur district where he landed for a review of the drought situation in Marathwada.

Khadse said the filtration plant, which was part of an old water scheme, was repaired and inaugurated on Friday. “I had sanctioned emergency funds for the project after the collectorate officials told me that if the old water scheme from Lower Terna dam was revived, it would help provide 40 to 50 lakh litres of water to Latur city, which was in such a grip of severe water crisis that the government had been forced to fetch water from far away Miraj by train.”

“I was here to give a surprise to the water-starved residents of Latur, but an unnecessary controversy is being raked up. I can say that from Saturday, Latur city’s water problems will be eased to a large extent.”

The Chief Minister’s Office also denied there was any wastage of water. “As per our information, there was no wastage of drinking water. Only untreated water released from filtration tank was used…” said a senior official from the CMO.

Local activists, however, said the work of setting up of the helipad commenced around 3 pm Thursday and was over by 10 am Friday, hours before Khadse landed. They said several tankers filled with water made the rounds of the helipad.

Maharashtra Congress spokesperson Sachin Sawant said, “The incident shows how insensitive the state government is. The minister had the option of driving by road, but instead he chose to indulge in criminal wastage of water at a time when Marathwada needed every drop of water.”